Here are some popular butterflies you can attract with Butterfly host plants through Vincent Gardens:

The monarch butterfly or simply monarch Danaus plexippus is a milkweed butterfly (subfamily Danainae) in the family Nymphalidae. Other common names depending on region include milkweed, common tiger, wanderer, and black veined brown. It may be the most familiar North American butterfly, and is considered an iconic pollinator species. Its wings feature an easily recognizable black, orange, and white pattern, with a wingspan of 3½–4 ins. The viceroy butterfly is similar in color and pattern, but is markedly smaller and has an extra black stripe across each hind wing. 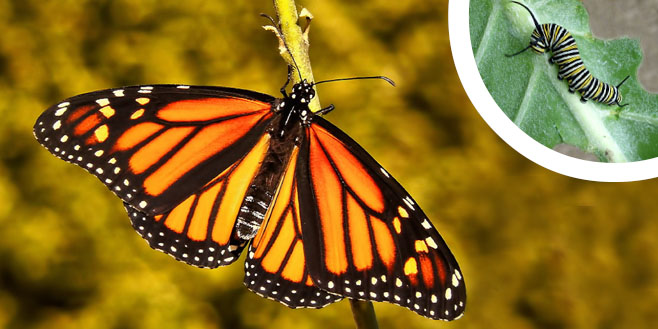 The eastern North American monarch population is notable for its annual southward late-summer/autumn migration from the United States and southern Canada to Mexico. During the fall migration, monarchs cover thousands of miles, with a corresponding multi-generational return north. The western North American population of monarchs west of the Rocky Mountains often migrates to sites in California but has been found in overwintering Mexican sites as well. Monarchs were transported to the International Space Station and were bred there.

The Range of the Monarch Butterfly

The range of the western and eastern populations of the monarch butterfly expands and contracts depending upon the season. The range differs between breeding areas, migration routes, and winter roosts.

In North America, the monarch ranges from southern Canada through northern South America. It has also been found in Bermuda, Cook Islands, Hawaii, Cuba and other Caribbean islands the Solomon’s, New Caledonia, New Zealand, Papua New Guinea, Australia, New Guinea, Sri Lanka, India, Nepal, the Azores, the Canary Islands, South Africa, Gibraltar, Philippines, North Africa and Honolulu. It appears in the UK in some years as an accidental migrant. No genetic differences between monarch populations exist. Reproductive isolation has not created subspecies.

The Malachite Siproeta stelenes is a neotropical brush-footed butterfly (family Nymphalidae). The malachite has large wings that are black and brilliant green or yellow-green on the upperside and light brown and olive green on the underside. It is named for the mineral malachite, which is similar in color to the bright green on the butterfly’s wings. Typically, the wingspread is between 3¼ and 4 ins. The malachite is found throughout Central and northern South America, where it is one of the most common butterfly species. Its distribution extends as far north as southern Texas and the tip of Florida, to Cuba as subspecies S. s. insularis (Holland, 1916), and south to Brazil.

Phyciodes, commonly but ambiguously called the “crescents” or “crescentspots” (like some related genera) is a genus of butterflies of the subfamily Nymphalinae in the family Nymphalidae.

The white peacock Anartia jatrophae is a species of butterfly found in the southeastern United States, Central America, and throughout much of South America.

The males of the species display a unique territorial behavior, in which they stake out a territory typically 16 yards in diameter that contains larval host plants. They perch in this area and aggressively protect it from other insects and other male white peacocks. 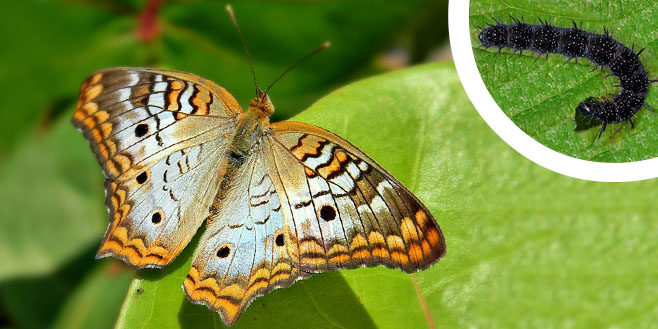 The Zebra Swallowtail has a wingspan of 2½ to 4 ins. The triangular wings are white to greenish-white with black longitudinal stripes. A pair of sword like tails extend from the hind wings. The inner margin of the hind wing has two blue spots on the corner and a red spot near the body. A red stripe runs along the middle of the ventral hind wing. P. marcellus has two seasonal forms, one occurring in the spring and the other in the summer. Spring forms are smaller, more white, and have short, black tails with white tips. Summer forms are larger, have broader black stripes, and longer, black tails with white edges. 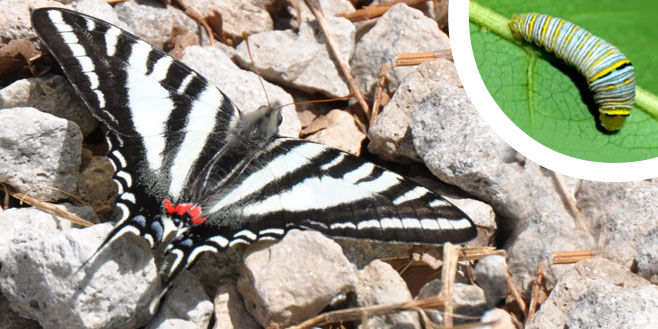 The Zebra Swallowtail caterpillar feeds only on species within the genus Asimina. Commonly used species include A. angustifolia (Slimleaf Paw Paw), A. incana (Woolly Paw Paw), A. parviflora (Smallflower Paw Paw), A. reticulata (Netted Paw Paw), A. tetramera (Four-petal Paw Paw), and A. triloba (Common Paw Paw). P. marcellus caterpillars ingest chemicals called annonaceous acetogenins from their host plants, which are retained in the body tissues of both the caterpillar and the adult, and may help chemically protect the butterfly from birds.

In addition you’ll also be able to get these

Subject to your growing zone, follow the links to Wikipedia for more details:

Search by Common or Botanical Name

Some of our Popular Plants 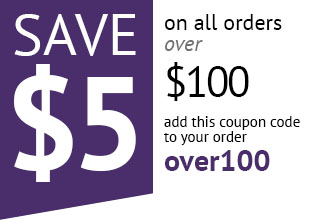 Vincent Gardens are members of